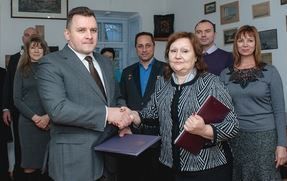 The collection of historical, cultural, memorial Museum-reserve "Сimmeria of the M.A. Voloshin" in Koktebel was replenished by the cultural values given by Sergey Lazutkin, General Director of "Proxy Centre" company.

The portrait of Maximilian Voloshin, painted in 1909 by main artist of Imperial theatres of St. Petersburg Aleksandr Golovin; the sculpture "The Head of M. Voloshin", made in 2000 by well-known St. Petersburg sculptor, a follower of the academic tradition by Fedor Gorodkov; and six autolithographies of 1922 of Konstantin Bogaevskiy were included in the number of cultural values given to the Museum. The artist was a close friend of Maximilian Voloshin, was inspired with him by the nature of Cimmeria (South-Eastern Crimea) and took advice from him to try his hand at a new genre of lithography.

The official ceremony was held in the memorial dining-room of the House-Museum of Maximilian Voloshin. Sergey Lazutkin and General Director of the Museum-reserve "Cimmeria of M. A. Voloshin" Tamara Steblyuk signed documents of the exhibits transfer. The values given to the Museum will take a worthy place in the collection and the permanent exhibition of the cultural institution, Ms. Steblyuk noted after the signing. The ceremony was attended by the first Deputy Minister of culture of the Republic of Crimea Tatiana Manezhina, the Hero of Russia, cosmonaut Anton Shkaplerov.

The General Director of “Proxy Centre” company noted that today Crimea needs revival of culture to become again the center of attraction for the largest figures of Russian culture as it was at the beginning of the XX century during Maximilian Voloshin period.

"Proxy Centre" company has been systematically involved in the economic and cultural development of Crimea for several years, today's event has become the next stage of this work," said Sergey Lazutkin.  - In 2015, the company initiated the annual Yalta International Economic Forum and became the founder of the Foundation "Yalta International Economic Forum". In 2017 in Crimea under the auspices of the YIEF Foundation we organized a tour of the ballet troupe of the famous choreographer, ballet master Oleg Vinogradov, which includes artists from several countries. Pre-premiere screenings of the documentary "A hellish chaos" directed by Sergey Debizhev was held in the cities of Crimea on the eve of the 100th anniversary of the October revolution. A concert of the famous Italian conductor Fabio Pirola featuring the St. Petersburg orchestra "Northern city" took place in Yalta”.